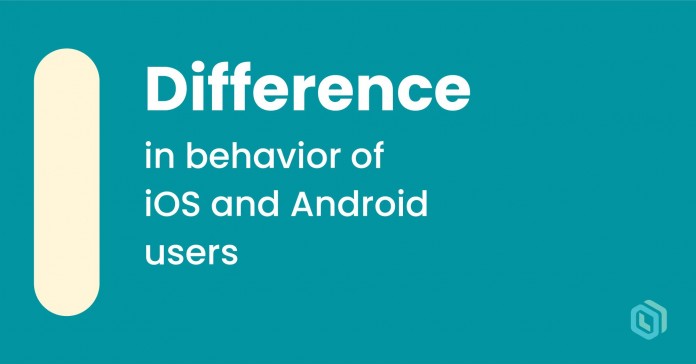 Smartphones have become an integral part of our routine, and we can’t imagine our lives without them anymore. Today, there are two leading mobile operating systems in the world: iOS and Android. Even though they have become much more similar to each other in recent years than before, they still have many differences. There are also some differences in user behavior of these systems. So, explore the iOS and Android users’ behaviors further in this article.

Before contacting mobile application building companies with a request to build an app, you should analyze the behavior of your target user. The application is successful when it is created after thorough research of the target user segment preferences. It is crucial that the app is able to solve the problems of its users effectively. A mobile app development company that focuses on understanding the target audience delivers relevant, valuable apps and can make a difference at a particular period of time. It is essential for mobile app-building companies to have a deep understanding of how user behavior changes between operating systems.

At first, let’s figure out the differences between the leaders among the OS for mobile devices – iOS and Android. Even though they are competitors, they are very similar. They both have a common origin, and both use the capabilities of touch screens to work with the owner of the device. They also have a standard set of interactions: pressing, swiping, and the ability to zoom with fingers.

In general, the differences are minor. However, there is one main difference. Android is applicable on devices from various companies; Google allows manufacturers to change the interface of the mobile OS to their preference. As a result, on the market, you can find many models with different interfaces. Therefore, when buying a new Android smartphone, you will most likely need adaptation period for the new interface. With iOS, such a problem doesn’t exist, and it only works on Apple devices.

As of 2021, the operating system market looks as follows: Android occupies 72.72% of the market share, iOS 26.47%. Android has the largest share in developing countries and low-income regions with a wider price range and lower prices. It has the edge over Apple in Asian and African markets. However, Apple is not losing ground despite Google’s global market dominance, as the average iOS user is more active than the average Android user.

One of the most notable differences between iOS and Android is customizability. Apple doesn’t allow you to customize your phone. Users can customize the wallpaper, choose the sound music (among the provided list), and that’s it. Android, on the contrary, allows users to customize anything and makes the device more personal to the user so that they can customize it according to their preferences. As a result, Android gives a lot more options to create a custom interface for the user.

The choice of smartphone and mobile platform can say a lot about our behavior, habits, and even personality. It can help you conclude that users are concerned about pricing, download interests, in-app purchases, and brand loyalty.  A user’s demographic data, such as age, gender, location, income level, and educational level, determine the smartphone that the user chooses.

Demographic analysis can help an app business evaluate commitment activities such as in-app purchases and in-app membership subscriptions for their target user segment. Most iOS users are from developed countries and are more financially secure. Android users, on the other hand, are a more price-sensitive segment. A large segment of Android users lives in developing countries. Affordable prices and an attractive user interface make Android a more popular choice than iOS.

Age and gender differences are not significant enough to influence the decision on the OS for an app. In contrast, income and location cannot be neglected if you want to build a successful application.

The way smartphone users respond to push notifications is different for Android and iOS operating systems. Android users are more likely to open their push notifications than Apple users. This difference in preference is a result of differences in the design of their user interface. Tracking the opening rate of push notifications helps a business to have a better understanding of user behavior based on the device they are using.

Apple devices have earned a reputation as secure devices. Till now, iOS remains eminently secure. The difference between both operating systems is that iOS is much more closed than Android. While Android is completely open-source, Apple’s source code is hidden. Thus, security threats in the case of iOS are rare.

Android, on the contrary, lags behind in terms of security. Although Google releases security updates every month, device manufacturers tend to release updates late. As a result, many Android devices have a slightly outdated version of the OS.

Loyalty to a specific platform

The best solution for your business would be to consider both platforms, which can help you grow your customer base. But if you need to choose between them, a clear understanding of both platforms is necessary to add value to the business. To choose the right platform for your mobile app, you first need to know the purpose of the app and your target audience. The points listed above can help you choose the most suitable platform for your business.